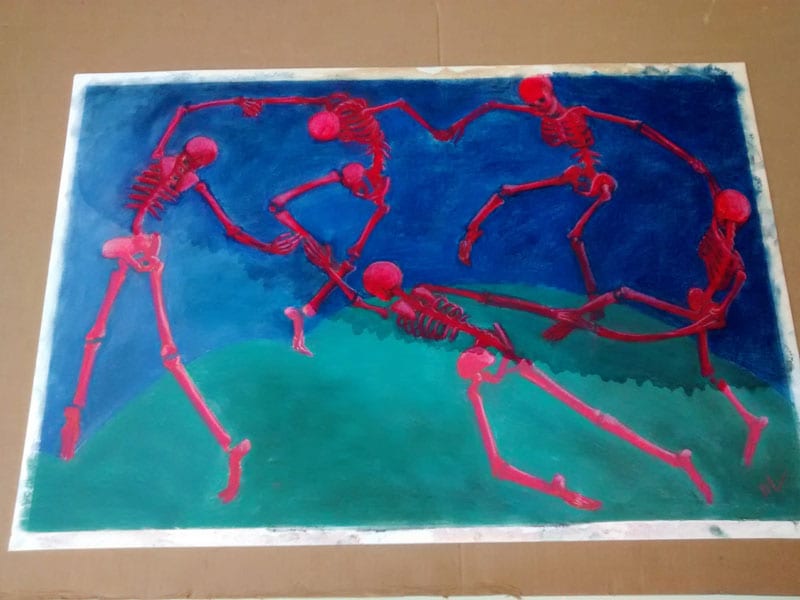 The Skelly Dance at the framer’s. It got a little wet.

…it’s best to have an insurance policy already in place. Failing that, a positive attitude can take you a long way.

“Marie, I have some bad news.”

A couple weeks ago the framer called to tell me one of my paintings for Art Prize had been accidentally destroyed. A pipe had burst in the ceiling over his shop and mine plus eight other people’s projects had gotten drenched. Tim, the framer, was distraught. I was the last person he’d called that morning and he’d been sick three times already.

I went over to his store and looked at the piece, decided it wasn’t salvageable, took a picture for my records, and reassured him I wasn’t upset. Then I went back to my studio to think about what the next step would be.

Since this piece was slated for Art Prize, it would be one of three things:

You’ll notice that nowhere on this list is the step in which I panic. At the time I thought it was odd that I wasn’t more upset about the loss, but then I thought, “You’ve been through this before.”

It’s true. Last year I lost four original skelly paintings and a slew of prints during the flooding in St. Augustine from Hurricane Matthew. That was pretty ouchy, but at the time, the gallery owner thought she might be able to arrange compensation through her insurance company.

As I should have guessed, flooding, which is what happened to my skellies down south, doesn’t count as compensatable damage. I think the hurricane actually has to leave a signed confession before an insurance company will agree that it will cover any losses due to one coming ashore for a visit.

Back to the drawing board, er, easel

After mulling it over, I went with steps 1 and 3. I alerted the venue and they agreed to take the Bona Lisa in lieu of The Skelly Dance, but then I decided to re-do The Skelly Dance anyway.

I’ve got time, after all. Art Prize isn’t until mid-September. Also, I’m a little leery about substituting art work without clearing it with Art Prize first. I’ve heard of people being disqualified from that show for small infractions. I could try to get a new piece juried in, but it’s way past the deadline now, so I will happily forgo opening up that can of worms altogether and count myself lucky this happened when it did.

Besides, if there’s one thing I’ve learned since I started making art every day, it’s if you did it once, you can do it again.

Nothing is so precious that it can’t be re-worked, or re-designed, or re-made from scratch. It was painting every day that taught me this lesson and I’m grateful for it. Because of this I can let something like the destruction of a piece roll over me like water off a duck’s back.

But I’ll tell you something—I went out and got an insurance policy for my art last week, because while a positive attitude can take you a long way, cash money makes for a smoother ride.

2 thoughts on “When disaster strikes…”