Today I brought my mother-in-law to my gallery. I was going to take her to the Ludington Area Center for the Arts to look at an art show there but she said, “Are your paintings there?” and I said, no, they weren’t. “I want to look at your paintings,” she said. So we ended up going to my studio.

I brought her in, helped her sit in one of my cafe chairs and she watched me paint a larger version of the painting above.

Afterward, I tried to get her to help me fill out a questionnaire from the American Cancer Society (she had lung cancer a number of years ago and the ACS sends out these forms for research purposes), but she was more interested in telling me what had happened to her this morning.

“They got me up and dressed me and then they said I could sit in my rocker chair or go back to bed. But they didn’t talk to me, just to each other! I got mad and said some things before I could stop my mind.”

She doesn’t care for it when the aides come into her room and act as though she’s not there, talking among themselves and not including her. It’s de-humanizing. Makes you feel like a worthless lump.

Diana can talk pretty well still and she understands a lot of what’s going on around her. If she feels pressure to perform she stumbles when searching for the words she wants. But she’s definitely all in there.

I get how it can be a lot easier to talk to someone who you work with every day than some poor old woman that you don’t know very well. But no one likes to be treated like a dummy. Especially not Diana.

On the way back to the memory care unit I thanked her for visiting my studio. “I’d like to come back again in two months,” she said. “Maybe next time I can paint, too.”

I’ll definitely do my best to make it so.

I like how the shadows carve out the snow. Or is it vice versa? I like it, anyway.

So I’m finding that having a clear horizon is important to me right now. That’s why I’m putting the lake out there. Cool, blue and attainable. I just have to get over these dunes first.

I met the nicest couple today. I was just putting a few final touches on a larger pastel and getting ready to begin work on this one, when I turned around to see them looking in my picture window. I poked my head out to say hello to their two little dogs and they all came in and we got to know one another a little better.

Dick is retired but has been painting for quite some time. “Just for fun,” he says. But he’s also managed to get 600 paintings done, so obviously his fun is pretty focused! He’s been accepted into several Art Prize exhibitions, so if I needed proof that practice makes opportunity, here it is. His wife, Kathy, is so supportive of his painting, kind of reminds me of my own beloved, Steve.

Dick, intrigued by my pastels, said he was going to go right home and order a set to play with. On their way out the door he thanked me for inspiring him. I should have told him it works both ways.

You can lead a person to water, but you can’t make her drink. Well, actually, in my case, you don’t have to make me drink. I’ll do it all on my own.

I like how the light comes right up to the lip of the dune where all the footprints are leading up to, and then it stops and everything from that point to the foreground and right off the edge of the paper is in shadow.

I have spent a lot of time painting landscapes with roads or paths in them. Recently I noticed that the roads all end somewhere about a third of the way or two thirds of the way up the picture plane, and the end of the road is usually obscured by clouds or distant trees. This is probably something to do with me thinking about my future and wondering whether I’m going to go like my dad did, via Alzheimer’s, or if I’ll get lucky and be like my mother, who died with most of her faculties still intact.

I like these dune pictures because the paths all lead to the water. I read somewhere that water represents spirituality when you dream about it. My water dreams aren’t very nice, but maybe if I keep painting water as a final destination they’ll change.

Did I mention? We just moved my mother-in-law up to a memory care unit here in Ludington. It’s a lovely place. She’s doing well there. I stop by to see her a couple times a week, Steve does, too.

It’s hard to watch someone you love losing their mind like this. And wondering if it’s going to happen to you, too.

Nothing I can do but paint it out. 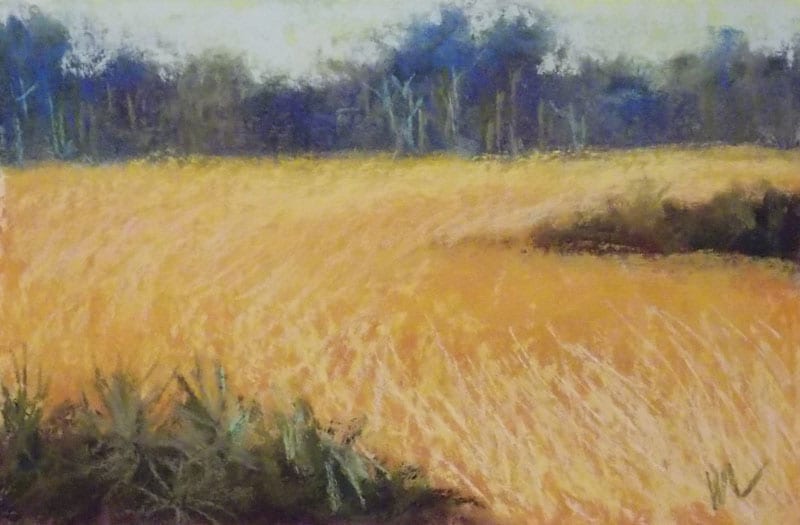 River of Grass, 6×9″ pastel on gessoed mat board by Marie Marfia 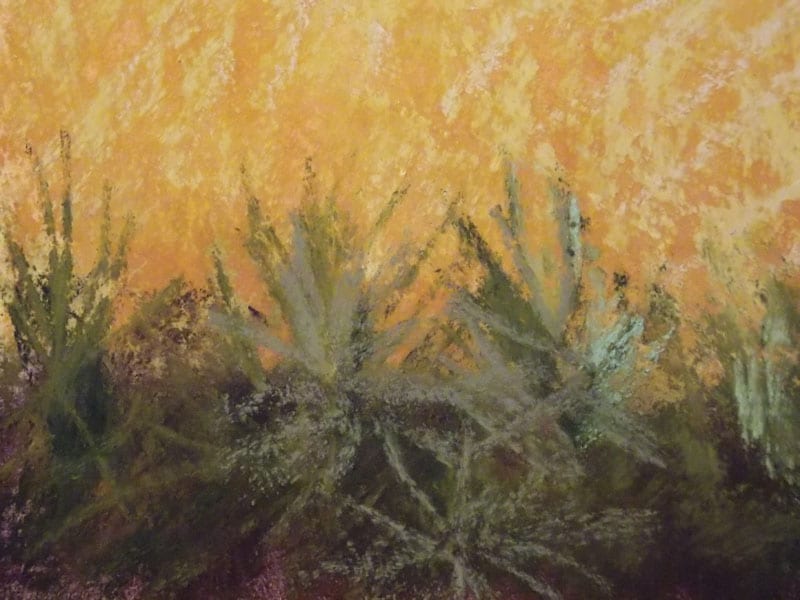 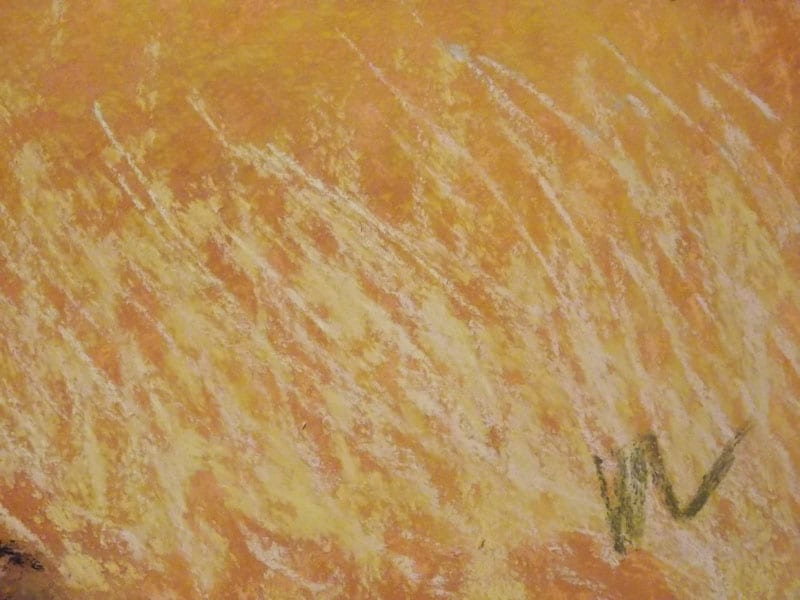 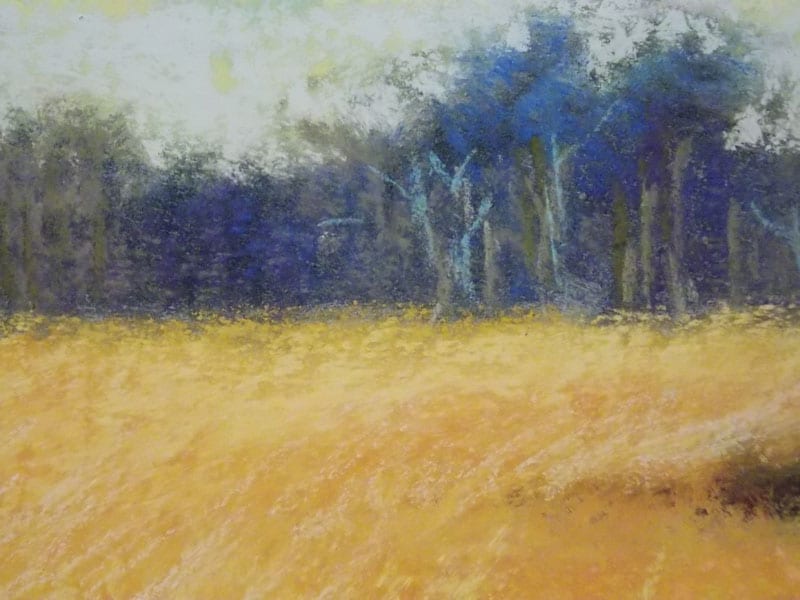 This painting is available at auction on ebay through November 21, 2015. After that, if you’re interested in purchasing it, contact me about payment and to arrange shipping.

Have you signed up for my weekly newsletter Bone Appetit? It’s a compilation of the best of my blog plus insights into my creative process and it’s delivered right to your inbox every week! Just fill in your email address on the right. Bonus, you’ll receive a printable note card featuring my mermaid skelly Hello Sailor just for signing up! See to it!

The first two houses Steve and I ever owned both had postage stamp-sized yards. That was fine with me because of the two us, I had the lower GLT (grass length tolerance) level and neither of them took more than a half hour to mow.

The lawn we have now could comfortably hold six or eight of our old lawns. Steve wanted a big ol’ yard when we moved here and, while I agreed that it’d be nice to have room for the kids to play, I made it clear that I wasn’t going to responsible for mowing it. So Steve bought a riding lawn mower, because, hey, that’s what you do when you have a big yard. Our son Nick liked mowing with the rider. I still remember seeing him racing around the yard in third gear, his hair streaming out behind him and a big grin on his face. He looked like a crazy person out there.

The kids are all gone now, so it’s just me and Steve and we still have this huge yard. Usually, Steve is pretty good about keeping it trimmed, but he’s gone until next week and it was starting to look pretty shaggy out there. I decided I’d mow it myself because 1. I am still plagued by a low GLT level, and 2. how hard could it be? I’d start early in the day before it got hot, and have it licked by 10am.

I used the push mower to do all the perimeter work and around all the trees and shrubs. That took about 45 minutes. I had already sweat through my clothes, but I drank a glass of ice water and went to get the riding mower fired up. Unfortunately, it had a flat tire and when I went to inflate it, the valve was buried under the rim somewhere. No problem, I thought. I’ll keep using the push mower. It won’t take that much longer to do. I walk every day. I’ve got this.

An hour later, with the ambient temperature at 90, I was having serious doubts about my ability to keep putting one foot in front of the other, much less push a mower at the same time. My legs felt like 40 lb. bags of cement. My hands were bruised from gripping the mower handle. I thought, I’ll stop when I finish this half of the yard. Three circuits later and I thought, I’ll stop when I run out of gas. Another circuit and I thought, I’m going to die if I don’t stop now. There’s a nice unmowed patch in the middle of the south side of the yard now. I’m thinking about calling it a wildflower garden and just letting it grow.

Here’s a progression of today’s painting:

I started with a gessoed piece of mat board, then blocked in with “dirt” colors, and rubbed the pastel in with pipe insulation. Then I came over the top with greens and blues, using direction strokes to mimic the way the grass grows in my huge lawn. I put a signature on before I was quite done with it, noticing as I took pictures what needed tweaking. Cameras are useful for this. I also included a picture of the pastel colors I used.