Well, well, well. We meet again! Skull still lifes throughout the spooky season. This is fun!

Sign up for my Bone Appetit newsletter! You’ll get regular updates about my latest work in the studio and insights into my process. Plus, get a free downloadable print just for signing up!

Sign up for my Marie Marfia Fine Art newsletter! You’ll get regular updates about my latest work in the studio plus insights into my process. Plus, get a free downloadable print just for signing up!

You can buy my art imprinted on all kinds of cool stuff in my Fine Art America Shop. You can purchase downloads in my Etsy shop or cards imprinted with a personal message and mailed for you in my Signed Cards store. Buy greeting cards, prints and stickers in my Square shop. You can purchase my original art on Daily Paint Works.

My husband and I are camping on a friend’s property for a week or so here in Tucson, AZ, and I’m taking the opportunity to paint horses!

This morning’s effort is a painting of a horse eating her breakfast in a small paddock.

I have always liked horses as subject matter, although I was never a riding enthusiast growing up. That said, when I was twelve or so, my sister and I pedaled our bikes for miles to a small farm every Saturday where we’d ride ponies all day long, stopping only for lunch. The farm belonged to Mr. and Mrs. S., friends of our parents whose kids had long since moved on to mini-bikes. They were happy to have us exercise the ponies. I didn’t much care for the long bike ride, although I’m sure my mother felt I needed the exercise. Mary probably would’ve have biked three times as far for half the riding time. She was crazy about horses.

I remember the air was hot and full of buzzing deer flies. We rode along mini bike trails out in the piney woods for hours. Socks was a dapple grey, the smaller of the two, and she took good care of me, patiently putting up with my considerable lack of riding skills. My sister’s mount was another matter. A beautiful appaloosa, Gepetta was almost horse-sized, very smart and an opportunist, as she regularly tried to buck Mary off at the first available sandy patch on the trail, sometimes successfully, sometimes not.

Once while we were eating sandwiches at the house, Mr. S. happened to overhear us telling Mrs. S. about Mary getting dumped. Mary hadn’t been hurt by the fall and we’d just followed Gepetta back to the house as usual and planned to go out again after lunch. But Mr. S. immediately went outside to where the ponies were hitched, and picked up Gepetta and threw her onto her back, saddle and all. She scrambled back up and stood there, shaking, while he yelled at her. Gepetta never bucked Mary off again, but I think Mary would’ve died before she’d have ratted Gepetta out to Mr. S. again anyway.

Eventually the ponies were sold or maybe I refused to bike over there, I can’t remember how or why we stopped going. Mary continued to find horses to ride, I continued to accompany her when she pestered me into it. I never have been a confident rider and in general I prefer to paint them, although our friend here put me up on her horse Easy last night and it was sweet. He’s a patient horse, too, very gentle, just how I remember Socks.

Smiling dog in the woods pastel coming at you 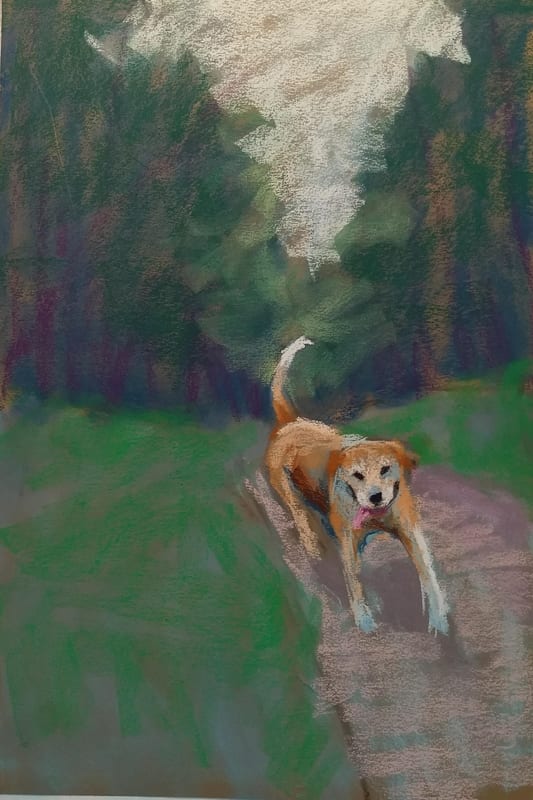 This is a pastel of my dog, Roger. He’s the one that always comes at you for a pat after he’s finished investigating whatever was in the ferns on the side of the road. Daisy goes around you, but Roger comes right at you. He’s a very good boy. 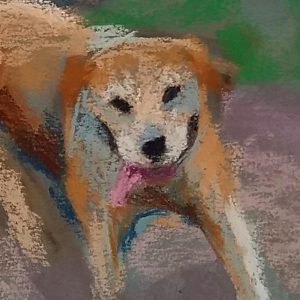 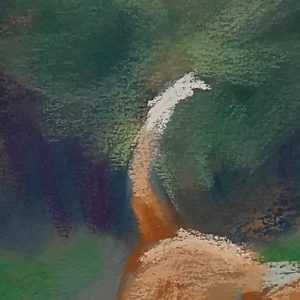 Like my blog? Sign up for my newsletter (on the right) and get a free wallpaper! Plus subscriber only deals on originals, prints, cards and canvas wraps!

Humming right along. I don’t always like what I’m ending up with but it’s okay because I’m learning! I’m excited to try again every day. Onward and upward. That’s the ticket. 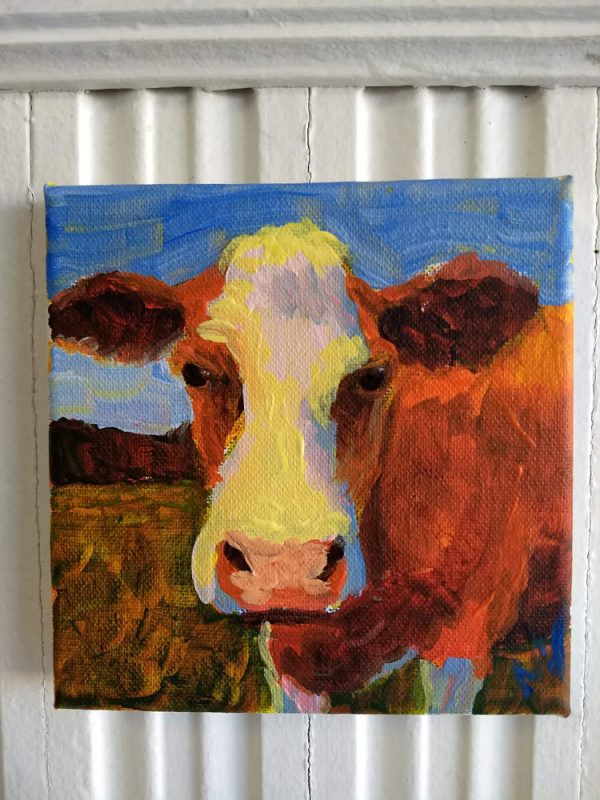 No. 5 is a quickie because I have to go down to Grand Rapids to meet up with my brother and his wife. We’re going to plant flowers in the family cemetery plots today. It’s always a great time to catch up. Joe says he wants to stop at a flea market that’s on the way, not to buy anything, but just to look at stuff and think about them. I can get behind that!

I was thinking about these little paintings of the dunes at the Ludington State Park and how I’d started painting them without a payoff, you know? Like the dunes were the obstacles in my life and I couldn’t see the horizon anywhere and then I thought, I need to put the water in there. I need to see the light at the end of the tunnel. I need a carrot so that I keep on climbing. So I put Lake Michigan in the middle of everything because that’s where I want to be.

This study is from a picture I took while driving around downtown Ludington, not sure of the exact year but I know it was probably November. November is when you get the fiery sunsets reflected against heavy clouds rolling in over Lake Michigan. It’s awesome and dramatic, probably why I took the picture in the first place, although back then I wasn’t doing any painting at all. Just taking pictures for some nebulous future time when I’d have leisure to do something with them. Now I know that future time is the same as now time and if you’re going to do something, it’s best to do it now. 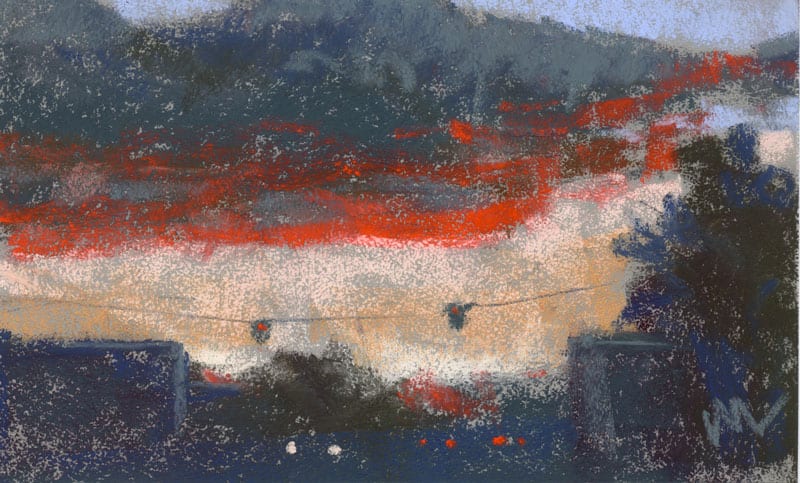 This is a painting taken from a photo of clouds looming from beyond the trees on our way home from the beach one day. I wanted to leave some evidence of the original drawing in this study. I like my initial sketches and sometimes feel it’s a shame to cover them up! 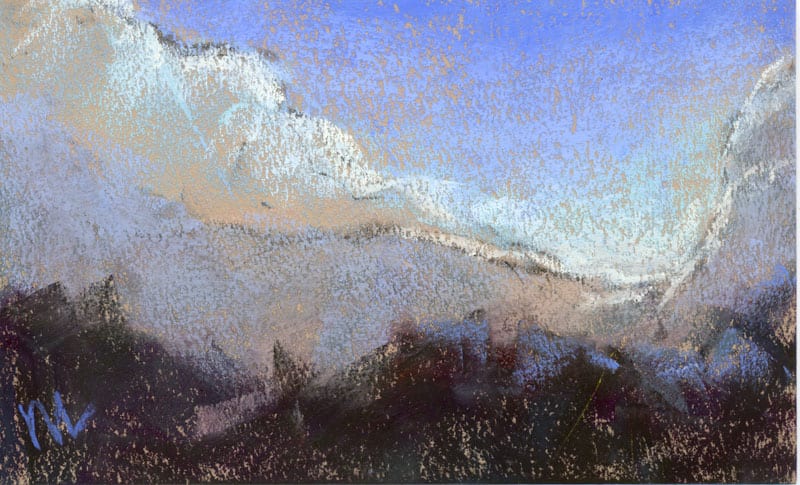 Behind the Treeline, 5×8″ pastel on paper by Marie Marfia. $75, unframed. Contact me to purchase.

Saturday, June 4, 2016 I took a mini workshop called “Paint the Sky” featuring one of my favorite pastel artists, Karen Margulis. (This was offered through First Coast Pastel Society, which is an awesome pastel group, if you’re in the area and looking to paint with a crowd of nice people. Everyone is very supportive and there’s a lot going on. I highly recommend you join them. I’m really going to miss these folks after I move.)

It was very intense because it was very short, but well presented and with a lot of good information. Karen challenged the workshop participants to paint 21 skies in the next 21 days, as a way of starting a new, daily painting habit. I already paint every day (well, almost!) and so I’m not too worried about the habit-forming part of the challenge, but oh, the skies! I can totally do that!

So here’s Sunday’s sky painting. This is a scene based on a photo my son Nick took while we were driving to karate class. I was blown away by the fiery clouds in the sky, handed Nick my camera and yelled, “Shoot! Shoot!” So he did and I found it again while looking through my photos on my computer in search of appropriate subject matter for the workshop. 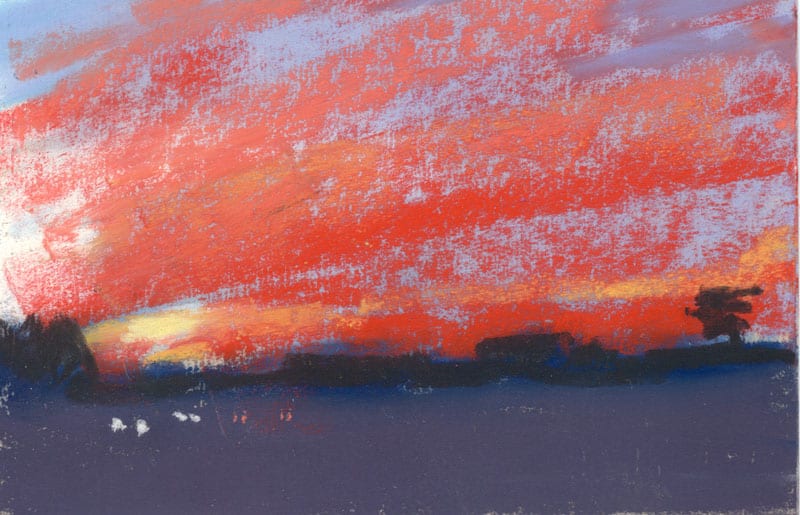 Even though these luscious sunsets are the result of more pollution in the air, which I hate, I still love the colors! I guess that’s a love-hate relationship. I can live with that. 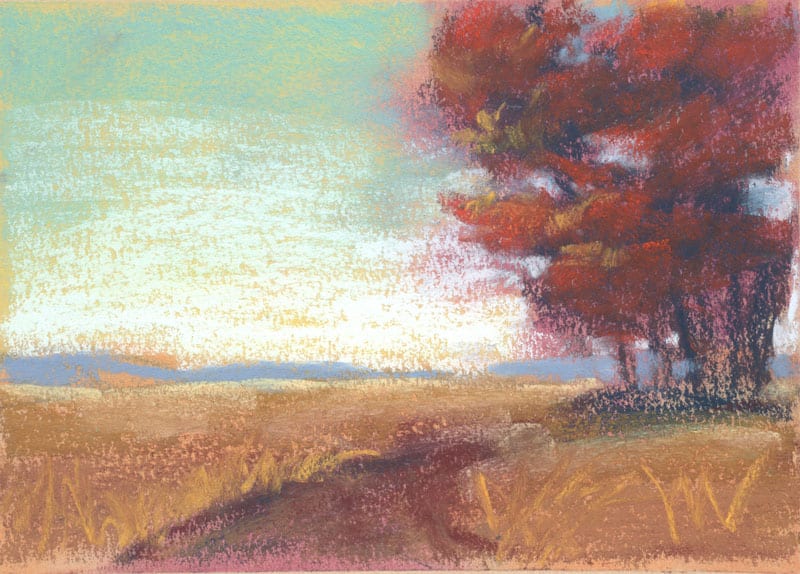 With this pastel, I am thinking about my move back to Michigan and four season living again. In Florida, there’s warm and hot, as opposed to cool, hot, crisp and cold up north. I miss the seasons, and yes, I even miss the snow. But fall is my favorite season. The trees are brilliant, the fields are golden and the sky is a warm blue with far off wisps of clouds. Autumn is awesome.