I had to try this one again, but this time I decided to make it a square painting. I found a version of the photo reference where her hat was in the air instead of laying on the ground, which I like much better. This is still a work in progress, but I like the direction of it.

And here’s the final. I love spending time with my granddaughter.

Sign up for my Marie Marfia Fine Art newsletter! You’ll get regular updates about my latest work in the studio plus insights into my process. Plus, get a free downloadable print just for signing up! 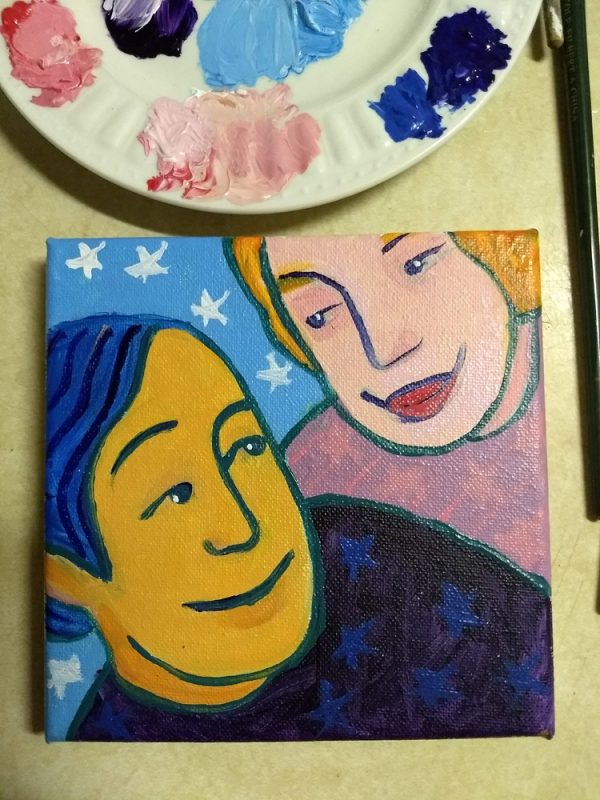 My son Nick and my husband Steve are on their way back from Florida.

I’ve been cleaning the camper, where Nick’s going to stay, at least for now. Steve flew into Orlando last week Sunday, but what with one thing and another, they’re only just coming home today, eight days later. It’s been an adventure, I gather.

I’m really looking forward to having Nick home again. I know I’m supposed to be all bummed about having a boomerang child living with us, but I’m not. It’s going to be a bit more crowded for sure, but I am not worried about that. I have always enjoyed Nick’s take on life, even when things aren’t going his way. He works really hard to stay upbeat. And he’s quirky and smart and fun to be around.

Bonus, built-in dog sitter! Although I haven’t actually asked him if he would do that. But it’d be sweet if he could.

I’ve been scanning the paper, looking for places where he could work while he’s here. His sister Alice has offered him a place to stay in the fall, if he wants to move down to Kalamazoo. He’d not only get the benefit of living with or near a sibling, but his cousin lives there, too, plus an uncle and aunt. So much family.

Sometimes you just need to be around people who know you inside and out. It’s easier to talk about things. Maybe it’ll be just what he needs to get back on his feet again.

I remember Nick’s sixth grade teacher telling me that someday someone was going to really connect with Nick and he was going rocket to the moon, he was just so smart and so talented. I beamed. Then with her next breath she said, “But it isn’t going to be me, because I’ve got 150 other kids to deal with every day.” And she walked out of the room.

I’ve been wanting to punch her ever since.

Not that it was her fault. I get that you’ve only got so much energy and that you’re spread pretty thin and this one kid is just not a priority. He’s not acting out, throwing things, threatening anyone. He’s keeping his head down, going along to get along, telling you what you want to hear. “Yes, I’ll take care of that. No problem. It’s fine.”

He tells you what you want to hear and then you leave him alone because you want to believe that he’s on track now, that he’s going to do all the things he needs to do, that he’s sincere about making changes. And by the time you figure out that he’s really in trouble, it’s just gotten so much worse than it was before.

This has always been Nick’s way. To divert attention from himself and his problems. To tell you what you want to hear. To say, “I’m okay. Yes, I’ve got plenty of food. There’s a job interview tomorrow. I’ll be fine.”

Steve went to get him and bring him home. Partly because I’m still working and he’s the retired one, so he’s got more time to spend on this. Partly because he and Nick have always been two peas in a pod. I knew they’d both enjoy spending time together. Nick gets his love of guns and fireworks from Steve. Also his bent for being logical and rational in his arguments. It used to routinely drive his older sibling Sam nuts. Which I’m pretty sure was the whole point.

So, I’m not really sure how this is all going to work out. If it’s a good decision to bring him home or a bad decision. No idea. Could go either way. But you know what? I’m still glad he’s going to be here, with us. We can do better. Nick can do better. Sometimes you just need a little help.

The part where he doesn’t ask for it? He gets that from me.

I did these two studies while I was working at the Attic last weekend. I combined two different photos for the reference and then tried it twice, once on warm toned paper and once on a cool toned paper. Which do you like best? 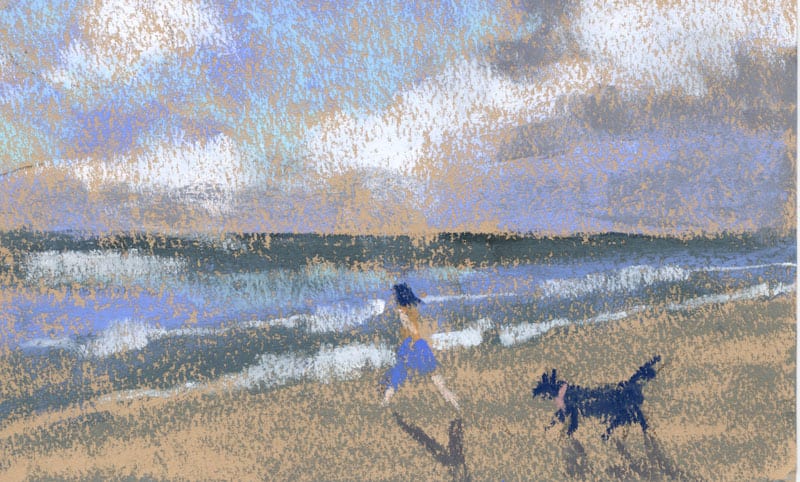 Nick and Abby, warm, 5×8″ pastel on paper by Marie Marfia. $75, unframed. Contact me to purchase. 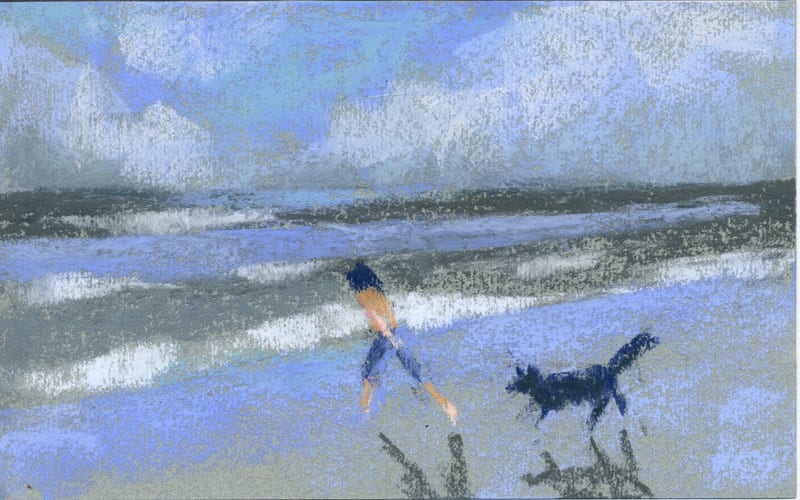 Nick and Abby, Cool, 5×8″ pastel on paper by Marie Marfia. $75, unframed. Contact me to purchase.

This is Dorothy’s granddaughter, Ruby. According to Dorothy, who I would trust with my children’s lives, Ruby is brilliant, talented, and can tell jokes, all before the age of three! But they’re related, so it all makes perfect sense.

I really got a kick out of this picture. Love the hat with the big flowers on it. And the bright orange background. Thanks for sending it, Dorothy!

Here are the progress pics:

This is my 30 Friends in 30 Days series. Each day I take a friend’s selfie and make a pastel painting from it. Then I post it to ebay at auction for 7 days. Follow my progress as I learn to paint pastel portraits with a little help from my friends.