It’s hard not to take it personally when I hear comments like these floating through the door at my studio. Maybe putting The Very Last Supper front and center in my shop window has something to do with it?

I could place a more traditional piece there, like a landscape or a still life or a portrait, and people would walk by and never say a word. But poke fun at a religious icon and suddenly everyone loses their minds. 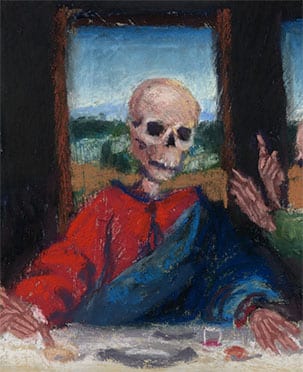 I could try to soft-pedal the subject matter by combining genres. For instance, skeletons with vases of flowers or skeletons in the landscape would be more palatable maybe. But I’ve found that skeletons are pretty polarizing as a general rule. People either really, really like them or they really, really don’t.

My mom was one of the latter group. Whenever I told her I’d sold another piece of skeleton art I’d have to preface the news with an apology. “Hi Mom, I’m sorry but I sold a skeleton painting today.” She’d always wrinkle her nose at the news, as though I’d just farted in front of her. “Oh, Marie,” she’d say, and sigh. She’s gone now, but I can still hear her sighing like a mournful ghost.

Certainly the skeletons don’t mind whether or not people like them. They’re glandless creatures and so they don’t have feelings that can be hurt.

The question is, can I live with some people not liking what I do?

The urge to please everyone all the time is a real issue for me. I come from a large family and I spent a good portion of my life trying to make people like me in order to get attention, which I craved. It was only when I hit menopause that I stopped caring quite so much. Once my body realized I was done reproducing, my brain took over and said “I’m in charge now,” and that was that. (See? Biology is another thing skeletons don’t have to worry about. More reason to love them!)

The bottom line is, I’m trying to learn how to paint. Studying the classics is a really good way to do this and adding skeletons makes it more fun.

But some people are not amused by skeletons, and they’re especially not amused by biblical scenes with undead people in the starring roles.

(I confess, I deliberately put that print in the window hoping to persuade a couple of political organizations, which shall remain nameless, to set up their tents elsewhere instead of directly in front of my studio during Friday Night Live events. And it worked, sort of. At least, the next weekend, they’d moved across the street. With them a littler farther away I figured I had a better chance of attracting my target demographic—people with a sense of humor who aren’t afraid of death.)

So to answer the question about what I can live with, while it bugs me when people openly sneer at my work, I absolutely adore the people who love it. They say things like, “These are so cool!” “That’s hilarious!” and my personal favorite, “I’ve gotta buy this.” So I’m going to focus my attention on them and everyone else, including my dead mother, will just have to deal.

Thank you to everyone out there who keeps laughing along with me. You know who you are. As long as I know you’re out there, giggling, I can handle a hater or two.

Are you a lover of skeleton art? Prove it! Sign up for my newsletter, Bone Appetit! And thanks for your support!

You can lead a person to water, but you can’t make her drink. Well, actually, in my case, you don’t have to make me drink. I’ll do it all on my own.

I like how the light comes right up to the lip of the dune where all the footprints are leading up to, and then it stops and everything from that point to the foreground and right off the edge of the paper is in shadow.

I have spent a lot of time painting landscapes with roads or paths in them. Recently I noticed that the roads all end somewhere about a third of the way or two thirds of the way up the picture plane, and the end of the road is usually obscured by clouds or distant trees. This is probably something to do with me thinking about my future and wondering whether I’m going to go like my dad did, via Alzheimer’s, or if I’ll get lucky and be like my mother, who died with most of her faculties still intact.

I like these dune pictures because the paths all lead to the water. I read somewhere that water represents spirituality when you dream about it. My water dreams aren’t very nice, but maybe if I keep painting water as a final destination they’ll change.

Did I mention? We just moved my mother-in-law up to a memory care unit here in Ludington. It’s a lovely place. She’s doing well there. I stop by to see her a couple times a week, Steve does, too.

It’s hard to watch someone you love losing their mind like this. And wondering if it’s going to happen to you, too.

Nothing I can do but paint it out.

I use a tri-pod and a DSLR camera to take progress photos of my art. This photo shows how I try to fill the viewfinder with my art. It also shows my messy studio, but that’s the subject of another post!

Bev asked about progress pictures. This post is for her and anyone else who is keeping an art blog and wants to know how I do this. I use my camera to take pictures and I use my iPad and the Motion Pics app for time-lapse videos.

This post is about taking pictures and making a slide show with them. I’ll talk about time-lapse in another post.

I set up my paper or matboard on my easel, then position the camera on a tri-pod in front of it. Then I go to the camera settings menu and select “white balance”. There is an option called “Preset manual” that I use which will automatically tell the camera to focus on whatever is in front of it, in this case, a piece of white paper or white foam core that I prop directly in front of the artwork area. Measuring the white balance keeps my pictures from having a blue or yellow cast to them due to ambient light sources.

This picture shows how I use the “white balance” settings on my camera to eliminate color casts from my photos.

I use a focal length (the telephoto option) that’s about midway between the widest angle and the closest angle, about 50 mm, so that the picture isn’t distorted and the sides of the paper or matboard are parallel to the sides of the viewfinder. I try to fill the viewfinder with my artwork. I take a picture after every step in the painting process.

Once the painting is done, I upload all the photos to iPhoto. I delete the photos that are blurry and then export the rest to a  folder on my Mac. I export them as jpeg files, high quality, large size. With these settings each image is about 160k, so the slide show loads quickly.

To make a slide show in WordPress on my blog, I click on “Add Media” at the top of my new blog post. I upload the photos, then with them selected, I click “Create Gallery” in the upper left corner. This takes me to a new window where I can add captions under each photo and rearrange the order of the slides. I select “slide show” under “Gallery Settings: Type.” Then I select “Insert Gallery” on the bottom right, and voila! I have a slide show. It doesn’t look like a slide show while I’m editing but if I select “Preview” at the bottom I can see how it will look when the post is published.

I’ll share how I make a time-lapse progression on a later post. Hope this helps, Bev! Let me know in the comments if I left anything out.