or, my very first art competition

Once I was a little girl, looking for love. Read on for the story of how I got started as an artist.

I was 5 years old, in kindergarten, and I had no friends, but I had noticed another little girl who seemed like she might be nice. She was pretty and shy and her name was Paula. The only problem was Paula already had a friend, Betsy, and Betsy wasn’t the least bit interested in adding another person to the entourage. It only made me want Paula more as my friend. How was I going to do this with Betsy in the way? 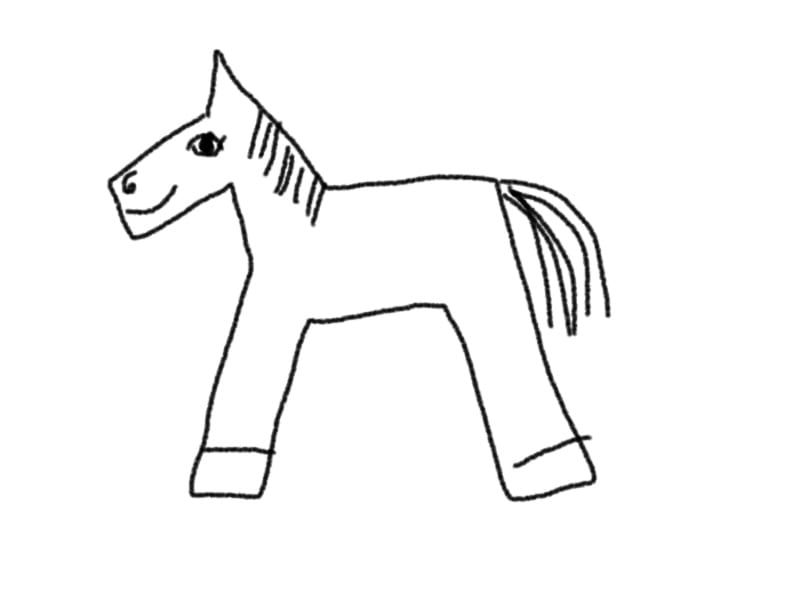 Success was immediate. Paula liked my horse and I thought everything was settled. The three of us would be friends and we’d all draw and color horses together. But then Betsy made another horse, only this time she changed it so it was slightly different than the horse I had just drawn. She cleverly added two extra lines to the horse, giving it four legs, instead of only two. Betsy’s new, improved horse looked like this: 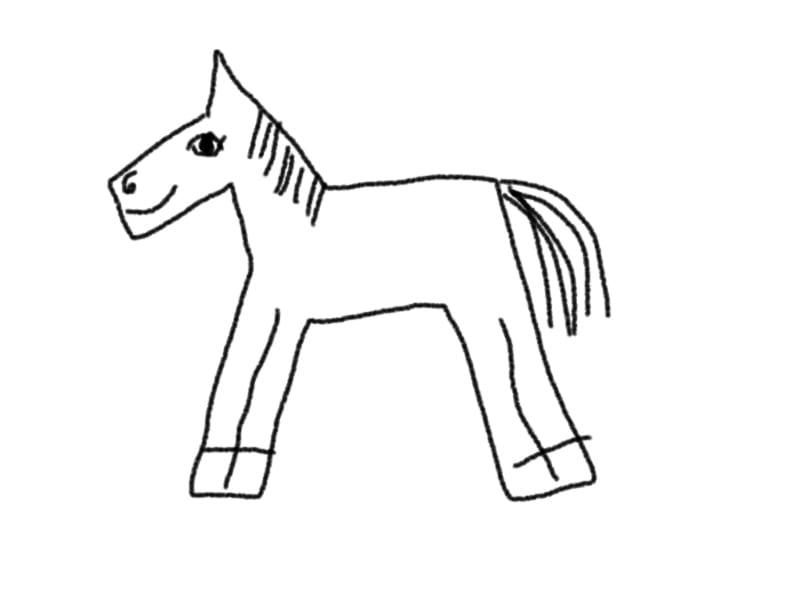 Horse with four legs, what?

Paula really liked Betsy’s new horse. That worried me. I began to think about what I could do for my next horse picture that would make it better than Betsy’s.

Did I mention that I come from a large family? By kindergarten, I was already a master at competing for attention. I had a baby sister who was blonde, rather than brunette like myself and I spent the first three years of her life trying get rid of her, dropping marbles into her bed regularly and hoping she’d choke on them, before admitting that maybe she wasn’t going away after all. Anyway, all this to say that when Betsy threw down the competitive horse drawing gauntlet, I was primed and ready. 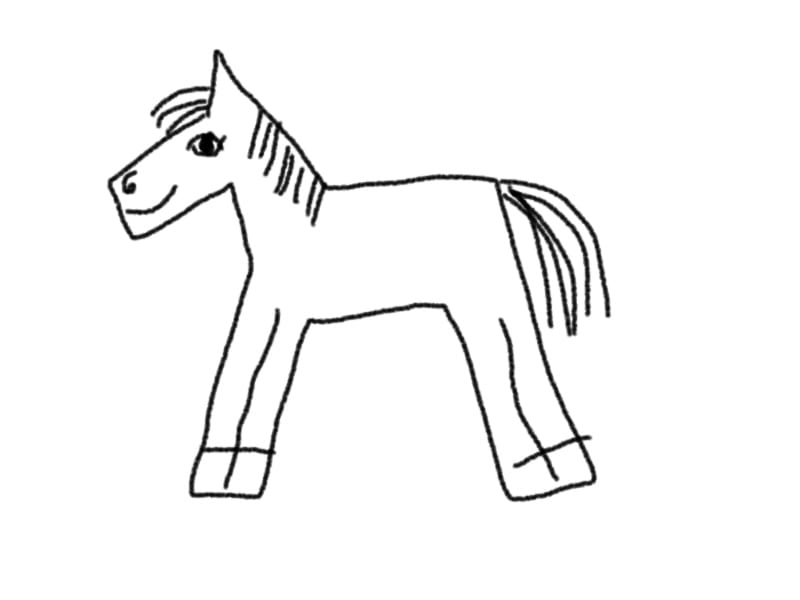 I’ll see your four-legged horse and raise you a forelock.

My next innovation in the contest was adding a forelock to my horse’s head. I didn’t know it was called a forelock, but I knew that horses had a tuft of hair up there, so I put one on. I remember being quite satisfied with this and thinking that Betsy wasn’t going to be able to top it. But then she fooled me and came up with eyelashes. 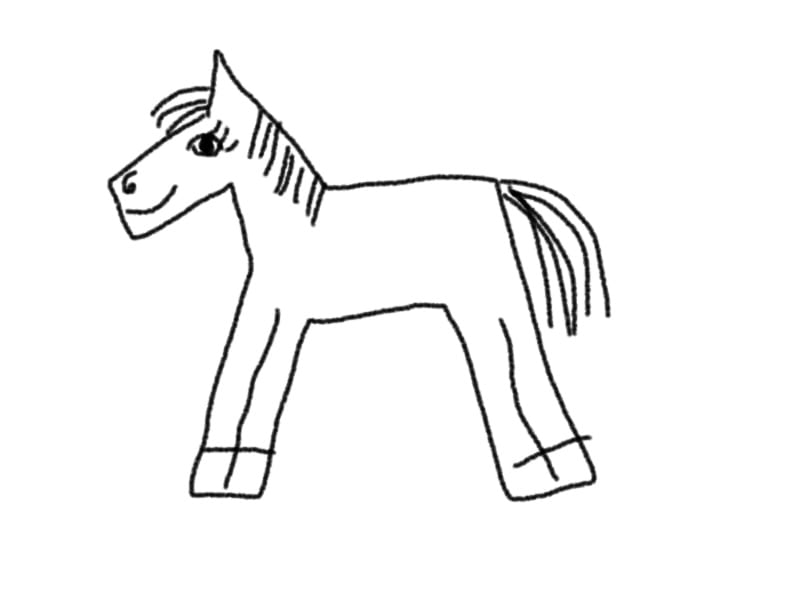 I couldn’t fault her logic. I wasn’t sure if horses had eyelashes or not, not ever having been close enough to one to notice, but Paula seemed to like them, so I added eyelashes to my next version and then did another thing that I didn’t really want to do but felt I had no choice about doing, things having already escalated so far. On my next horse, I made the mane and tail curly. 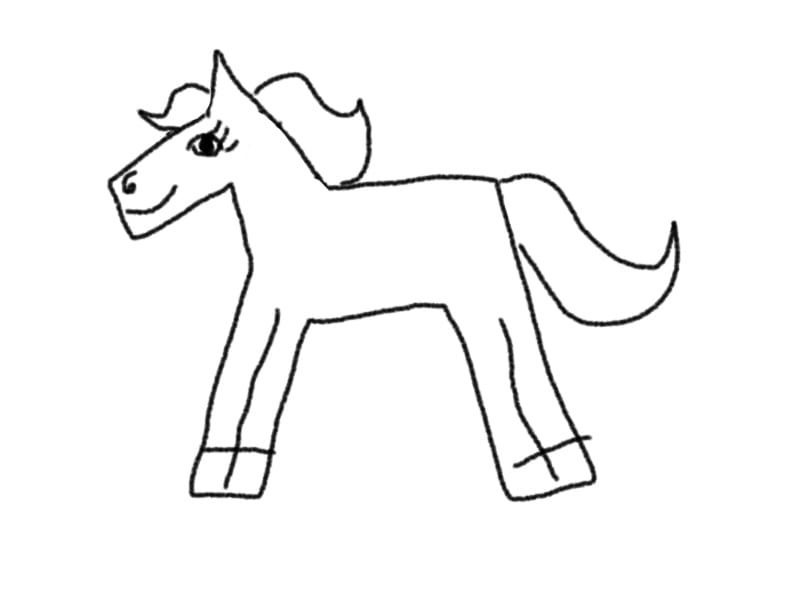 After that, things went downhill pretty quickly. Betsy decided to put a ribbon on her next horse and I balked at this. I hadn’t been proud of the curly hair anyway, but ribbons felt utterly wrong to me. I refused to do them and so lost the contest, and ultimately, Paula’s friendship. Remember, this was 30 years before My Little Pony. What did I know? I was only five. 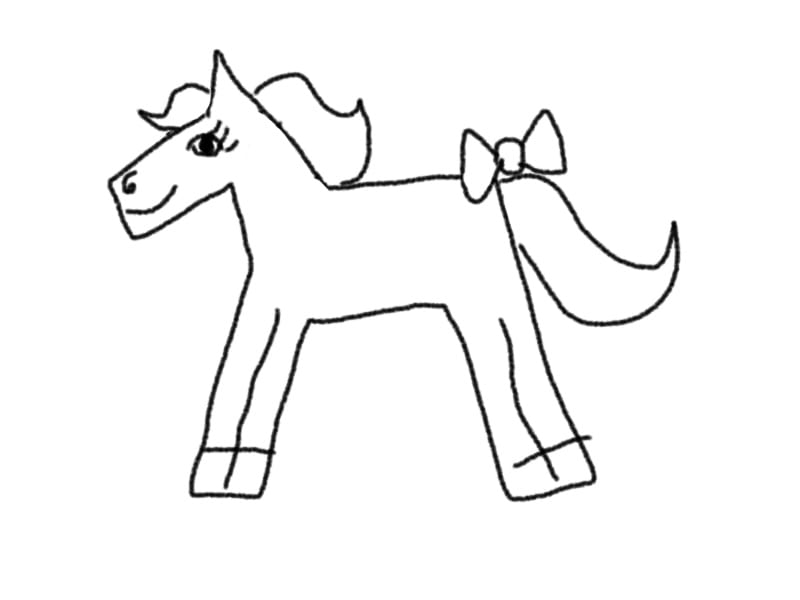 It turned out okay in the end. In the course of the contest I discovered I liked drawing horses just for me. This made up for the fact that I still didn’t have any friends. And I also learned some important lessons that have stayed with me all my life: 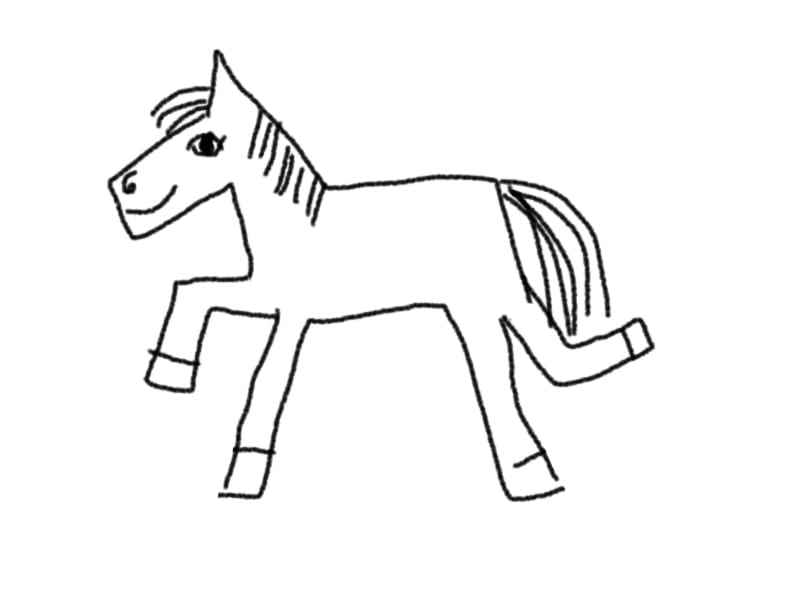 This is the last drawing I made, after the competition was over. You can see that I ended up going back to regular hair and then separating the legs so that it looked like my horse was actually going somewhere. I liked it best of all of the drawings I did that day.

Which just goes to show that drawing in series is always a good idea. You never know where it’ll take you, but the good news is, if you make a wrong turn, you can always go back.

3 thoughts on “How I got started as an artist”