Where did skellies come from? 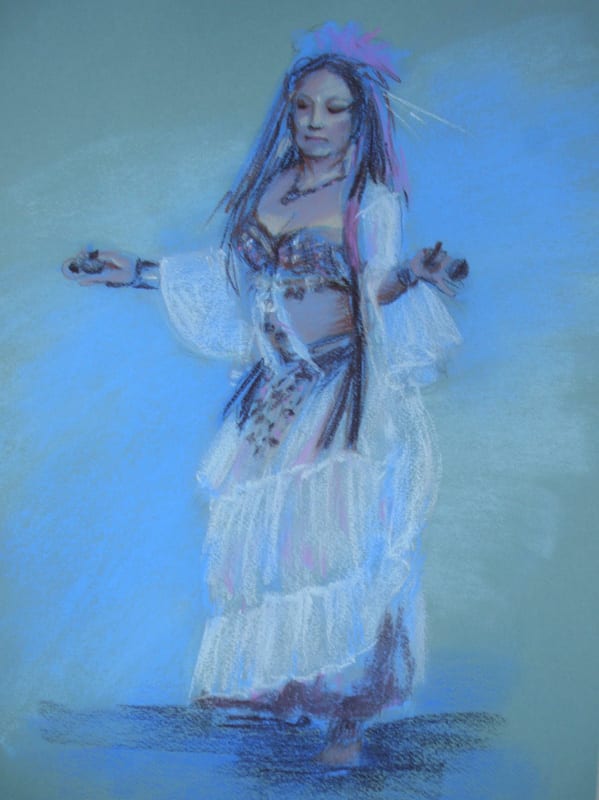 Skellies started out as a variation on 100 Belly Dancers, which was the first pastel series I ever did. A couple years ago, I’d gotten through about half of my goal to draw a hundred pictures of a local belly dancing troupe, and I was feeling the need to do something different. You know how it is when you’re in the middle of something and all you can see is the other half of the mountain left to climb? I needed a break.

I thought about painting a belly dancer in the style of a famous artist, but which one? Then a friend suggested Salvador Dali and right away my brain began running with it. I decided if I were Mr. Dali, I would paint a skeleton, rather than a fleshy figure, and it seemed only natural to put her on the beach. I ended up doing around ten “Skelly Dancers,” (that’s a play on “belly dancers,” get it?) and then, refreshed, I finished my original series.

I get the call

Fast forward about six months when I received a call from Joyce Hayes of the Starving Artist Gallery, in St. Augustine, Florida, where I was currently showing my skellies. She asked if I’d be interested in having a show at the local Limelight Theater in St. Augustine for the duration of The Addams Family Musical. I couldn’t say yes fast enough! There was just one problem. I had sold most of the original Skelly Dancers already and only had a few left. Joyce said there was room at the Limelight Gallery for 20 paintings if I wanted the space. This left me only two months to come up with another 15 finished paintings before the show opening.

At first, I thought about not doing skeleton paintings for the show. Why not do Addams Family portraits instead? But I discarded this idea pretty quickly. I wasn’t that interested in recreating someone else’s work for this, my first almost solo art show. Eventually, I decided to do skeletons, but rather than just dancing, I wanted them to be actively hanging out in St. Augustine, being tourists. I decided to call the show, Greetings from St. Augustine.

If you’ve ever been to St. Augustine, Florida, you know that it’s a great tourist destination. There are beaches, historical landmarks, eateries, trolley tours, horse-drawn carriages, the works! Plus it’s often billed as the Oldest City in America. I thought about how many ghosts must be haunting the area and what their after lives must be like. Ghosts probably had a lot of free time. What would they do with it all? Added to that, ghost tours are a huge draw in St. Augustine and they offer them all year long. I’ve been on a few myself and they’re creepily fun. So this would be perfect! I had my focus.

Right away I began doing the math to see how many paintings per week it’d take to fill the Limelight, subtracting the time I’d need to frame everything. I’d need to do three paintings a week, minimum, to have enough to fill the gallery. Not impossible, but pretty intense. But happily, I work well under deadlines. It’s the nearly 30 years of graphic design in me that relishes a challenge, I think. I took a deep breath and got to work.

I went a little nuts

I Think It’s Working, skeleton at the Fountain of Youth in St. Augustine, Florida. Click to see larger image.

The next two months were crazy. One painting idea led naturally to another. I especially loved coming up with the titles. They became more and more fun to do as I went along. I made numerous trips to St. Augustine from my home in Jacksonville, to take reference photos for more paintings, using my husband Steve as my model, and just soaking up the touristy ambience.

On the night of the Addams Family Musical’s first performance, I and my husband both attended and enjoyed a great show with wonderful and talented performers. It almost didn’t matter. I was much more interested in seeing people’s reactions to my skeleton art. Some people chuckled at the art and the titles, and others physically hid their faces from the frames, unable to look at them. This kind of freaked me out. At least, people weren’t indifferent, I told myself.

I needn’t have worried. By the end of the show’s run, I’d not only sold original work, but also lots of prints and cards. The box office said they’d never had that kind of response to artwork in the gallery before, so they were thrilled and I was quite pleased. I again put the skeletons away, thinking that it had been fun and now it was over and time to move on.

But even now, a year later, they haven’t been exactly resting in peace. The prints and cards keep selling. Skelly fans keep sending me ideas for more paintings. I keep doodling skeletons on my sketch pads. Recently, I had card collectors tell me they like to use the cards in collages. This makes me very happy! I love that people want to use my art to make more art! Recently I submitted them to a licensing agency and they were accepted for representation (Art Licensing International, Inc.)! Woohoo! So, for the next couple of years, at least, I’ll be revisiting these capering bags of bones on a regular basis.

Why is this? It’s definitely not because they’re easy to draw. I mean, all those little bones! Fingers and toes are just killer on these things. Lately, I’ve toyed with the idea of putting shoes and gloves on them, just to cut down on the labor, but that would be cheating, of course.

One thing I don’t have to worry about is catching a likeness. I mean, a skeleton could be anyone, or any sex, or any skin color. You can’t tell because it’s just bones.
Maybe that’s part of why I like them so much. They’re every body, one size fits all, one size is all.

And I think, too, about how everyone’s got skeletons in the closet, even me. But painting them is a way for me to let them out to play, to dance to the music, to crack jokes, to behave in outrageous ways, to be themselves, without giving too much away, without getting depressed, without fear of the consequences. 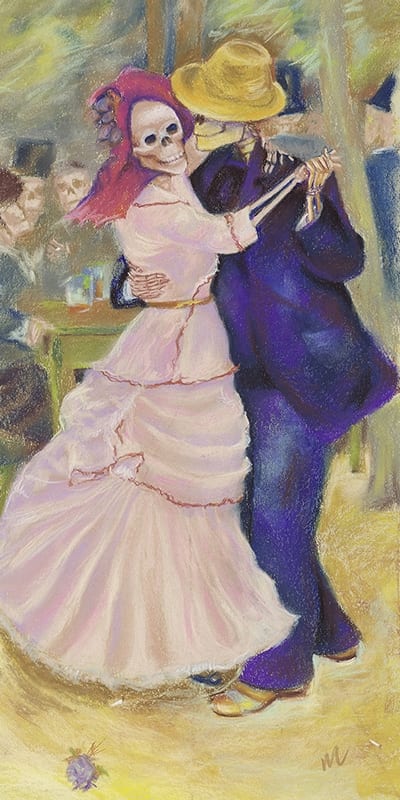 Whatever they are, they used to be alive at one time. They’ve passed on, but they’re not unhappy about it. They’re doing everything they’ve always wanted to do. Nobody can stop them. There’s no threat that will scare them, because, guess what? They’re already dead!

They’re just bags of bones dancing on a beach somewhere, uncaring about anything but the ghost of a tune playing in their heads. That’s freedom, right there. Long may they reign.

Click below to find out the winner of the Name This Skelly Painting draw!

Winner, you must email me your address so that I can ship out your print! Thank you to everyone who entered! You make this so much fun!